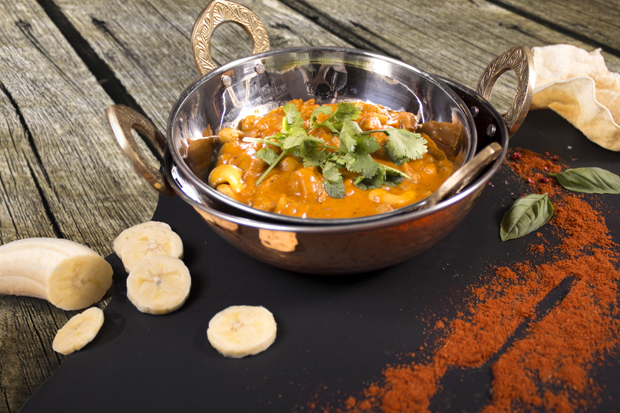 Heat the oil in a large pan, add the finely diced onion and chopped garlic. Cook, stirring frequently, until the onion is soft and clear but has not browned, (about 5 minutes). Add the ginger, curry powder, cumin, coriander, and cook, stirring constantly, for about a minute longer.

Add the chicken to the pan and cook, stirring occasionally, until it has lost its pinkness, then stir in the tomatoes, (plus juice), evaporated milk and tomato paste. Allow the mixture to boil, then reduce the heat to a gentle simmer and cook for about 10 minutes, or until the chicken is cooked through.

Stir in the remaining ingredients, adding the salt only if required, and reheat without boiling. Serve over steamed rice, accompanied with poppadums and/or naan bread.

In a large glass, dissolve the dry yeast and 1 teaspoon sugar with 3/4 cup warm water, (about 40 degrees C). Let it sit on your counter until it’s frothy, about 10 minutes.
Meanwhile, sift the flour, salt, remaining 1 teaspoon of sugar and baking powder into a large, deep bowl.

Once the yeast is frothy, add the yogurt and the olive oil into the glass, and stir to combine. Pour the yogurt mixture into the dry ingredients and add the kalonji and fennel seeds, if using, and gently mix the ingredients together with a fork. When the dough is about to come together, use your hands to mix. It will feel like there isn’t enough flour at first, but keep going until it transforms into a soft, slightly sticky and pliable dough. As soon as it comes together, stop kneading. Cover the dough with plastic wrap or a damp tea towel and let it sit in a warm, draft-free place for 2 to 4 hours.

When you’re ready to roll, make sure you have two bowls on your counter: one with extra flour in it, and one with water. The dough will be extremely soft and sticky-this is good! Separate the dough into 6 equal portions and lightly roll each one in the bowl of extra flour to keep them from sticking to each other. Shape the naan. Using a rolling pin, roll each piece of dough into a teardrop shape, narrower at the top than at the bottom. It should be approx. 20cm long, 10cm wide at its widest point and about 0.5cm thick. Once you’ve formed the general shape, you can also pick it up by one end and wiggle it; the dough’s own weight will stretch it out a little. Repeat this method with the rest of the dough. (If you’re making the gluten-free version, you’ll have better luck pressing the dough out with your fingertips, than rolling.)

Warm a large cast-iron skillet over high heat until it’s nearly smoking. Make sure you have a lid large enough to fit the skillet and have a bowl of melted butter at the ready. Dampen your hands in the bowl of water and pick up one of your naans, flip-flopping it from one hand to the other to lightly dampen it. Gently lay it in the skillet and set your timer for 1 minute. The dough should start to bubble.

After about 1 minute, flip the naan. It should be blistered and somewhat blackened, don’t worry – that’s typical of traditional naan! Cover the skillet with the lid and cook 30 seconds to 1 minute more.

Remove the naan from the skillet, brush with a bit of butter and sprinkle with a little coarse sea salt. Place the naan in a tea towel-lined dish. Repeat with the rest of the naans and serve.